Short synopsis: The film tells the story of a couple suffering a relationship collapse, apparently triggered by the tragic loss of their only child. A therapeutical trip to a forest retreat turns to be so revealing that it provokes their own demise. But actually, the collapse of their relationship is caused not by the loss of their child, but because of the discovery of the woman’s rampant schizophrenia, that goes far back before the story’s beginning.

The film follows the physical structure of a novel: is divided in prologue, four chapters, and ended by an epilogue, all these introduced by visual queues and the temporary halt in the narrative. Most definitely, we are been told a story. Do not forget that.

What are the reviews like?
Breaking News: This film is not for everyone. Well, it wasn’t made for everyone and it hasn’t been rated as a PG, rather as an 18 certificate in Ireland. It does contain violence, nudity, explicit sex, but also some of the most astonishingly beautiful sequences I have seen in long time.

First of all, go and watch it: Is the only way to make your own mind, and who else do you need to make yours? At the end of the day, you made the effort to watch ‘Bruno’ though you knew it was going to hurt, so why not doing it for a film made by someone who at least has done more than one great film?

Also, if you are going to bitch about it, go and watch it first.
Dont do like a number of Inquisition-styled critics that are complaining almost of it being blasphemic, thought they haven’t even bother seen it! And don’t let the voices that claim it is too violent, too perverted, the sickest film ever made, etc. dampen you enthusiasm in finding out for yourself. Just beware: it is a story for adults.

My experience?
I watched ‘Antichrist’ at the IFI, on a half-full room, sitting in the last row, dead centered, and managed to get two empty seats in each side for extra silence. Unfortunately, all the annoyed people in Dublin that couldn’t get a ticket for U2 that day decided to ruin my film and annoy me with their snacks noises, loud comments, and at some point when an animal speaks in the film, their laughs.

Honestly, I was following people’s reaction as much as the film – I had no choice -, coming to the conclusion that definitely this film is not for everyone. The girl in front of me was even stretching her arms, body-yawning, incidentally blocking my view. The over 60s couple on my right were talking as if the world was a giveafuck away from them. The two guys on my left were constantly overreacting, screaming. And someone a few rows far away was messing with a plastic package. The usual at Cineworld, a pity for IFI.

Well, it is ok; I learnt to control myself and to breathe a long time ago. Although I thought about requesting silence, the movie was actually grabbing their attention at times. But why were they so not into the film? Why so altered and uneasy? Was it cause they were missing U2’s gig? Not sure, not sure. I was truly getting interested in the film myself, despite all that drama in the room, and was threading in my head my way back to its message.

Says Slavoj Žižek, that “the paradox of cinema,[is] the paradox of believe. We don’t simple believe or do not believe, we always believe in a kind of conditional mode: ‘I know very well is a fake, but nonetheless I let myself be emotionally affected’ […] “. Yes, suspended disbelief. That is exactly how and why you enjoy a film, a story, a legend, by temporarily setting aside some questions and letting your empathy follow the trail laid in front of you. The question remains when do you start to make the questions?

Too early: One of the most irritating things that happen while watching the film was when a good few in the audience laughed hysterically and out of rhythm (I mean, clearly not laughing cause it was funny) at the speaking animal scene. Hard to explain, but my feeling is that there is a lack of maturity in those who laughed. As if they were letting loose and infecting each other with a reason to underline their sanity – cause explaining themselves what the film was exposing was just to hard a calculation.

I was imagining their thoughts: ‘Ha, animals dont speak! This is ridiculous!’. Yes, animals do not speak. Unfortunately, we have had a rain of films in the last decade of speaking animals, that you have enjoyed and never questioned. (And there are more coming) Cause they were films and you suspended your disbelief, as the message wasn’t buried too deep. But they were films for kids, so it was easy not to laugh – we all know films for kids are fantastic and require not to be taken literally. It is a pity that when the same effort is requested for grownups films, the audience fails to give. Remember ‘Dogville‘? Now that was disbelief.

“This strange status of believe, accounts for the efficiency of one of the most interesting characters […] in staging as such, the character of prologue” (Žižek). Each time the film stops to introduce the next section, we are reminded of the artificiality of the experience, ‘it is a film’, yet some wish to remain offended or disturbed. Lets say that some people, including a load of critics, have become too conformist to look only anywhere else but in the surface and are neglecting to see whats underneath.

This is what I call the ‘6th Obstruction’.

But wait. Look at these stills. 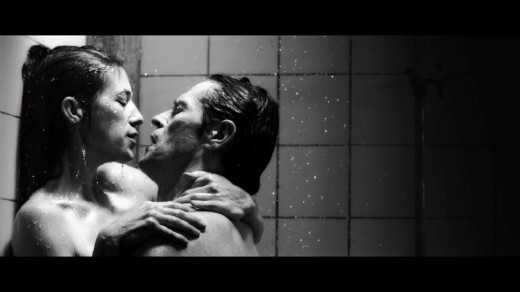 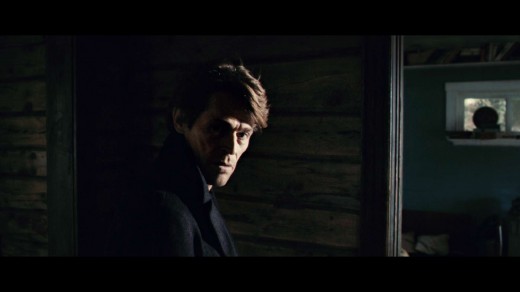 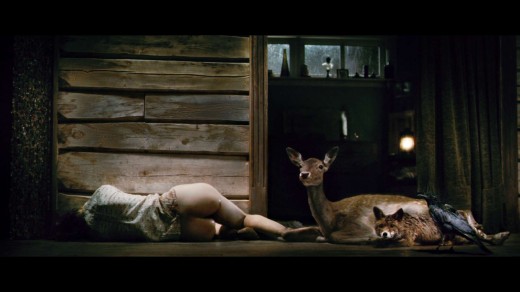 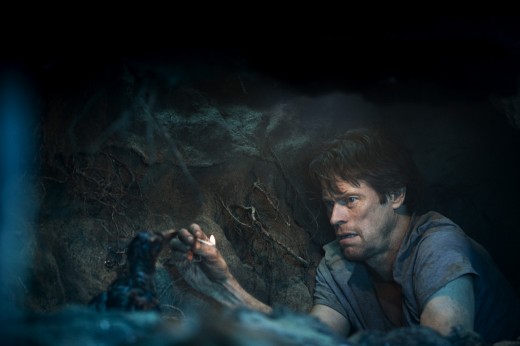 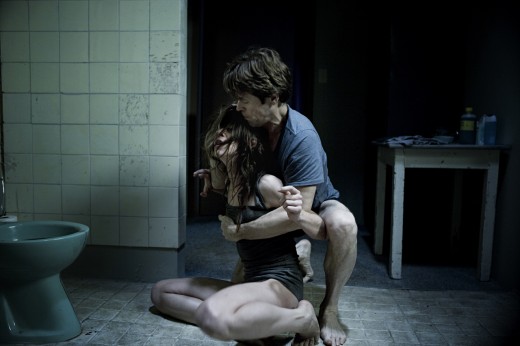 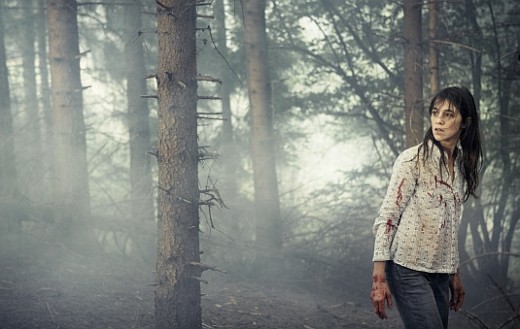 Do they look to you as those of an abominable movie?

No. Certainly not. And there are even more elaborated scenes for which I couldn’t find stills. It has been very carefully produced, with very high technical standards, far away from Dogme 95. Your true feelings about this film have been obstructed by someone elses interests. First, those of the Director’s PR machine, that surely are enjoying the benefits of the bad publicity. And then, the media, those newspapers, magazines, radios, TV channels, that have NOTHING to say, cause they have lost the power and will to analyse and now merely repeat.

Excessively sexual? What, more than Caligula, Nine 1/2 Weeks, Emmanuelle, etc? Not. Perhaps they need to learn more about sex in film. The film starts with a purposely beautiful slo-mo sex scene interweaved with other non sexual narrative elements. Yes, you can see his dick in profile slowly thrusting into her vagina, for like 5 seconds. And? Oh, for fucks sake, grow up! If this offends you, where do you look at when you are making love?

Excessively violent? As in more than Final Destination 3, The Texas Chain Saw Massacre, American Psycho, Misery, etc? Not. And by the way, you cannot get more violent than in catastrophic films like Armageddon, Die Hard, and the like. Or is it dying collectively that removes pain? This film has only 4 scenes of those that make you look away. And even then, they are not narrated to disgust, they are rather underlined with a straight view; a way of saying this is it, a prick in your eye so you understand the consequences of her mental disorder.

In any case, dismissing the whole film because of certain scenes is plainly ludicrous.

The strength of this film may well be that there are two conflictive narrative layers: that of the reality that is external to the film (the PR marketing, the reviews, Cannes, what you heard, etc), that critiques how excessive and irrational this film is; and that of the film itself, that warns us about how an uncritical mind can end up putting believes above reason, dominated by unruly passions, to the point of loosing its mask of sanity, becoming schizophrenic.

The 6th obstruction is your mind. 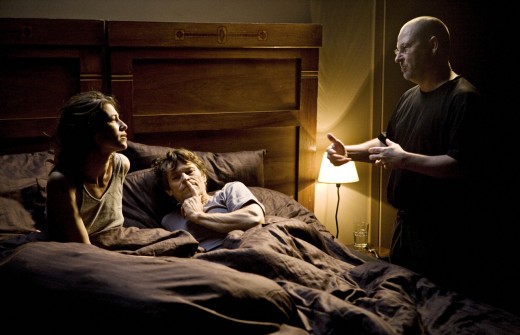 After all, this is a story for adults.

Daily Mail:
What DOES it take for a film to get banned these days?

Time Out:
Will you dare to see Antichrist?

Irish Independent:
Antichrist was Lars’ ‘fun’ way of treating depression
Is Antichrist anti-women?
The films that pushed audiences to their limits
Movies: Antichrist *

Now, go and watch it. And if you care, find out about the Five Obstructions:

A final recommendation.
If you want to read under the grass, here’s a very necessary shovel: ‘The Pervert’s Guide to Cinema‘ by Slavoj Zizek, conveniently divided in a 14 videos playlist.