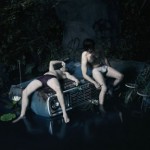 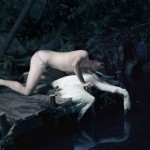 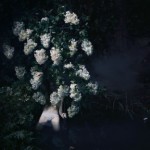 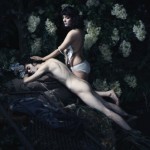 The much-anticipated new series of work by Jeff Bark, Woodpecker, is full of dark romanticism. Under the cover of a manufactured night, his young subjects indulge in moments of introspection and abandon, echoing Bark’s own memories of his near adulthood. A short film accompanies the photographs.

The subjects of Bark’s previous series, exhibited at Michael Hoppen Contemporary in 2006, were captured in moments of self-contained abandon in formally constructed urban interiors. In Woodpecker, his subjects are pictured in naturalistic outdoor tableaux, sometimes interacting in couples or groups but always with the suggestion an internal isolation. The rich detail, vivid self-contained illumination and the complexity of the constructed surroundings in these photographs draw the viewer into the dense pictorial allegory.

Occupying a space between the classical artistic categories of photography, painting and film – Bark moves against the lure of instantaneous photography. The collaborations, castings, set construction (the swamp took one month to sculpt in a Brooklyn studio) and illusionary narrative in the series bring the act of photo taking closer towards the highly considered processes of both the Old Master tableau and the younger art of cinema. Nothing is built by Bark beyond the edge of the frame and his subjects are snatched out of real time, so the audience is viewing an enactment, a constructed diorama rather than reality. Held together in a film, cinematically constructed, dissected and reassembled – the works can be looked at as individually structurally significant, and also as part of a larger extended narrative.

In these photographs, scenes of dream-like concoctions coexist with unembellished realism. The muted moonlit tones soften the human forms and the watery illumination lends them the appearance of otherworldly creatures indulging in their private fictions, desires and escape. The images are heavy with symbolism: the swamp, at the fringe of urban sprawl is a no mans land between civilization and the wilderness: the swan, recalling the erotic motif of ‘Leda and the swan’ but also signifying, light, self-transformation and the higher self. On first glance, the location is a rural idyll but on closer inspection urban debris is revealed – a pram, crates, tyres, mattresses, telephone wires, bed frames and a car are strewn amongst the rotting landscape. The corruption of the scenery is mirrored by the corruption of the youth – drugs, disillusionment, violence and sexual behavior, referencing Eric Fischl and his depictions of psychosexual malaise of American prosperity.