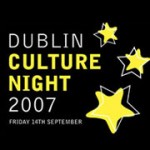 Friday 14th September.
Building on the massive success of the inaugural Culture Night last year, the number of participating organisations has more than doubled to over 80 cultural venues throughout Dublin City.

Specially organised FREE events including dramatic performances, readings, exhibitions, dance performances, concerts and films are all on the agenda for Culture Night 2007, where the city’s museums, galleries, historic houses, cathedrals, studios and other cultural venues will stay open for an extended period of up to 10pm*.

Preparations are well under way by organisers, Temple Bar Cultural Trust (TBCT), who started planning the Culture Night 2007 programme with participants late last year following the huge positive response from the public and cultural venues around the city. Almost 50,000 people visited the participating cultural venues during the 2006 event and this year organisers are conservatively aiming to increase that number to 80,000.

Commenting on the initiative Gráinne Millar, Head of Cultural Development at TBCT said “We have a number of new supporting partners on board this year which will make a huge difference to the evening. Free buses linking people to the venues will be provided by Dublin Bus, street entertainment will be supported by Dublin City Council, Fáilte Ireland is promoting the evening internationally and the city’s retailers are providing artistic promotional space. There is massive support and momentum surrounding this year’s event.”

According to Gráinne it is a realistic goal to roll out this initiative in other cities around Ireland within the next couple of years, “We have already developed a framework for the event which could be implemented in Cork, Galway, Waterford etc. We learned from last year that the public are very receptive to the idea and delighted with an opportunity to gather together in the city on a Friday evening for a combined cultural and social experience. Now in its second year, this unique event came about as organisers at TBCT, and indeed other large cultural institutions around the city, saw the demand for opening their doors later. Dubliners and visitors to the city now want something a bit different on their night out.”