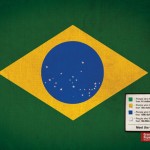 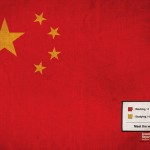 Grande Reportagem is a Portuguese news magazine that is recognised for its investigative reports and excellent photo-journalism. In 2004 the magazine switched from being an independent monthly publication to a weekly supplement in the Saturday edition of the daily national newspaper Diário de Notícias, owned by the same publishing company.

The creative challenge of the campaign was to reaffirm the magazine’s unchanged commitment to serious journalism by focusing on topics that are important for people’s understanding of the world today.

This led the creative team to the concept “Meet the world” and to the idea of using flags of different nations as vehicles to transmit it. In each case, the colours that appear on various national flags were used to symbolise a social or political issue that is specific to the country in question. For example:

China – the dominant red background of the Chinese flag is used to symbolise the proportion of 14 year-old child workers in China, while the smaller yellow stars represent 14 year-old children in school.

The campaign encompasses eight fundamental themes. In addition to child labour and the war in Iraq, other subjects addressed the distribution of wealth in Brazil, child mortality in Burkina Faso, drug trafficing in Columbia, the abuse of woman in Somalia, the spread of infectious diseases in Angola and energy wastage in the European Union.

In each case the agency consulted organisations like Amnesty International, the United Nations and various national institutions to ensure that the points made in the campaign were supported by facts and hard data.