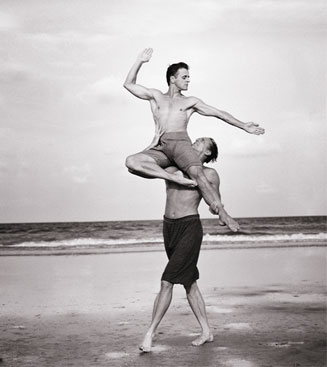 A Photographer’s Life presents over 150 images by one of the world’s best-known photographers. Leibovitz’s celebrated portraits of public figures, including her famous images of Queen Elizabeth II, and the then-pregnant actress Demi Moore, are shown alongside personal photography, which documents intimate and moving moments from her life, including the birth of her children and rites of passage with her parents and extended family.

Annie Leibovitz: A Photographer’s Life, 1990–2005 includes over 150 photographs by the celebrated photographer, encompassing well-known work made on editorial assignment as well as personal photographs of her family and close friends. “I don’t have two lives,” Leibovitz says. “This is one life, and the personal pictures and the assignment work are all part of it.”

The exhibition features many of Leibovitz’s best-known portraits of public figures, including actors such as Jamie Foxx, Nicole Kidman, and Brad Pitt; athletes preparing for the 1996 Olympic Games; George W. Bush with members of his Cabinet at the White House; and her famous 1991 image of then-pregnant actress Demi Moore, one of the most recognisable photographs of its time. The show also highlights images of artists and architects such as Richard Avedon, Brice Marden, Philip Johnson, and Cindy Sherman. Leibovitz’s assignment work includes reportage from the siege of Sarajevo in the early 1990s and the election of Hillary Clinton to the U.S. Senate.

At the heart of the exhibition, Leibovitz’s personal photography documents scenes from her life, including the birth and childhood of her three daughters, and vacations, reunions, and rites of passage with her parents and extended family.

Annie Leibovitz: A Photographer’s Life, 1990–2005 threads together the two sides of Leibovitz’s work both chronologically and creatively, projecting a narrative of the artist’s private life against the backdrop of her public image as one of the world’s best-known portrait photographers.